Cheapest way to go from Ulaanbaatar to Beijing

Travellers who go on the Trans-Mongolian route usually do the whole thing by train, but sometimes it can be a lot more expensive, and even much longer, than taking the bus, or like we did, cross the border with 3 different types of transportation.

On our Trans-Mongolian train journey, we actually only took the train three times : from Moscow straight to Irkutsk for 4 days on the Trans-Siberian Train ending up on the beautiful Olkhon Island on Lake Baikal ; from Irkutsk to Ulan-Ude and from Ulaanbaatar to Zamin Uud, a Mongolian town at the border with China.

During our dreadful week in Ulaanbaatar staying in our hostel trying to figure out what to do next, we had time to talk to a lot with fellow backpackers. One of them, who was doing the Trans-Mongolian route from East to West, told us that he paid half the price by not taking the train to cross the border. Thanks to him, we saved a lot of money on this trip !

Usually booking a train from Ulaanbaatar to Beijing (or Beijing to Ulaanbaatar) will cost you around 180,000 MNT (around 80 €) for one person. We paid half of that, plus it was an actual adventure !

Here is the cheapest way to cross the border between Mongolia and China, going from Ulaanbaatar to Beijing (or Beijing to Ulaanbaatar).

We booked the daily night train from UlaanBaatar to Zamin Uud, a town on the Mongolian side of the Chinese border. We were doing this at the last minute so there were no tickets left for the hard sleeper (3rd class) and we had to buy the soft sleeper tickets (2nd class). Soft sleeper class on a Mongolian train is a 4 beds cabin.

We paid 39,200 MNT each (around 16€), which is the regular price for a soft sleeper. We got to sit back and relax on our bunk beds, gazing at the immensity of the Gobi desert from the train window. We left Ulaanbaatar in the evening and arrived in Zamin Uud early the next morning.

As soon as we got off the train, we were surrounded by taxi drivers asking “China ? China ?”. They know the drill : no one comes to Zamin Uud to spend a vacation, everyone is here to cross the border to China. Our friend at the hostel told us the usual price is 30 yuans (around 10,000 MNT / 3,50€) for one person.

Every time a taxi driver was coming to us asking for 20,000 MNT each, I said 10,000, they all laughed at me like yeah right. But I didn’t give up until I bargained 8,500 MNT for the both of us. I know, it’s hardcore bargain, but to be honest, it’s all the mongolian money we had left, so I had no choice. Even the Chinese family who came with us in the jeep paid more… 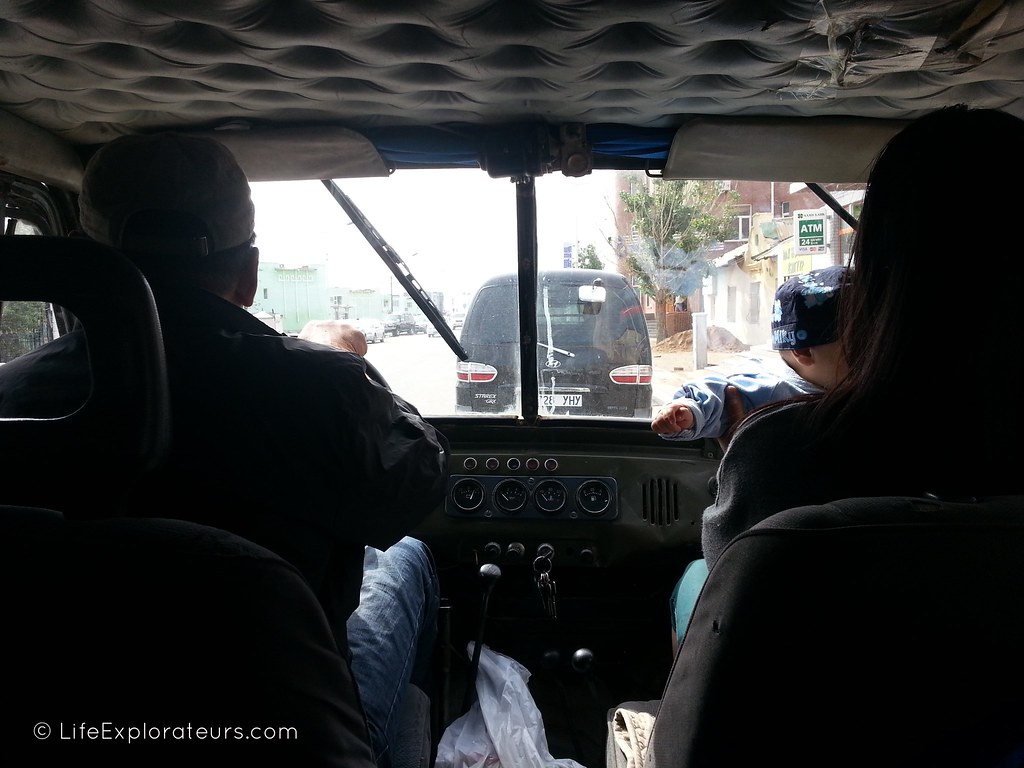 What happened next was quite fun. We got on this hundred years old jeep which didn’t have proper seats or even roof, with a Chinese family of 3 for road companions and drove to the border. We stopped in the queue for hours, waiting our turn.

Everyone was getting out of the jeeps, smoking, eating, drinking coffee, talking… or even fighting because some drivers were trying to overtake everyone else on the line (we saw that a lot in Mongolia). All this, chaperoned by military men, watching over the whole thing or just casually smoking and talking to the taxi drivers. We were quite the attraction as well, since we were the only westerners there, in a crowd of Mongolian and Chinese people. 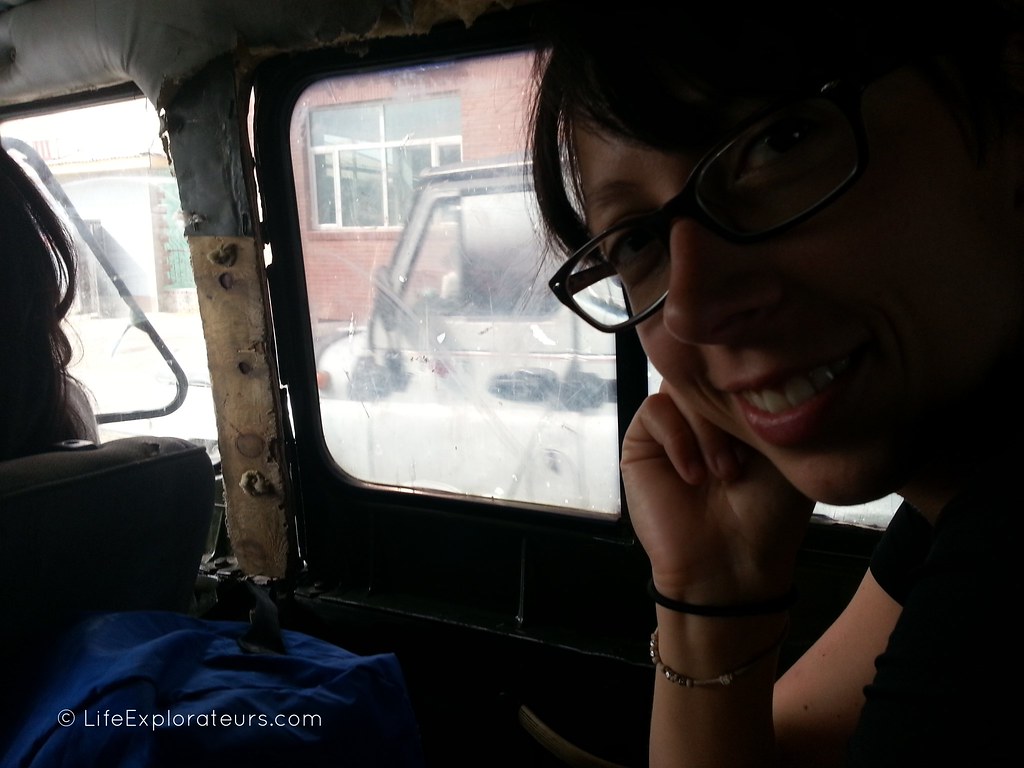 Crossing the actual border between Mongolia and China was just like every other border. We stopped at the Mongolian border first, we got off the jeep with our luggage, had to pay an extra 1000 MNT (don’t even try to ask them why, they yell at you something in Mongolian), they scanned our luggage, checked our passports and visa, while the jeep was being searched.

We got on the jeep again, drove a few meters, then stopped at the Chinese border, and same thing again, this time with another 5 yuans fee (for… what ?). And that was it ! After 2 hours of passport/visa/luggage check, we arrived in the Chinese town of Erlian, in the Inner Mongolia region of China and our driver drove us to the bus station. 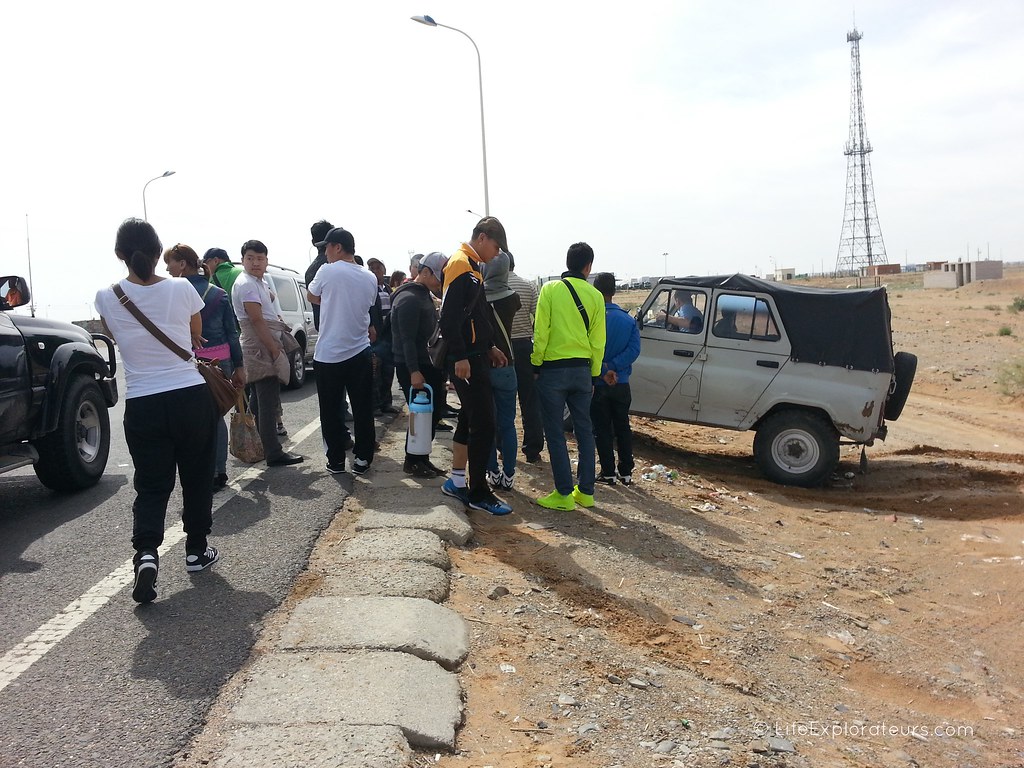 It was almost noon when we arrived at the bus station and the next step for us was to take the sleeper bus to Beijing which was departing 3 hours later. The bus tickets cost us 220 yuans each (around 26 €), and it took us around 12 hours to get to Beijing.

It’s the first time we experienced a sleeper bus, and although the concept does sound comfy, it was probably the worst trip we went on. It was loud, smelly, noisy and well, people were spitting all the time.

Now this is a thing you have to know about China, if you haven’t been there yet. You will experience Chinese people spitting in China : they think it’s healthier to spit out the bad stuff you’ve got inside you… It’s just the way it is, be prepared !

This bus trip was also the first time I experienced the concept of shared toilets when we stopped for dinner : basically a tiny room, with holes in the floor, no dividing walls and let’s say a strong smell. 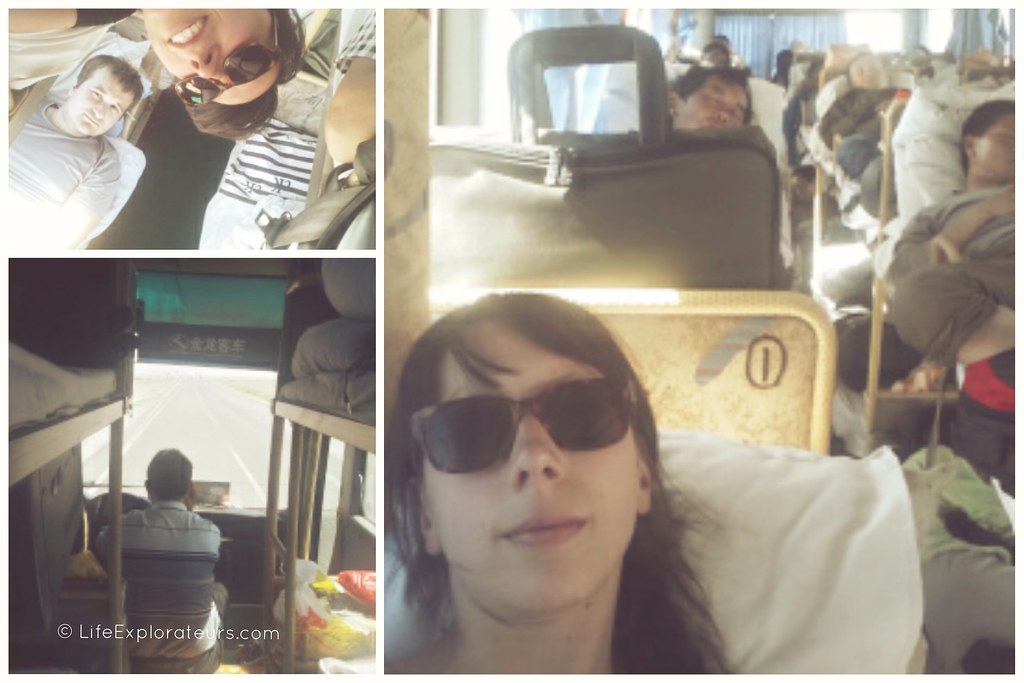 If you don’t picture what a sleeper bus is, picture a dorm in a bus, that’s basically what it was. The size of the bunk bed was fine for me as I am quite petite but Antoine was a little stuck, so again, same as the Trans-Siberian train, if you’re tall or wide in this case, you probably won’t be as comfy as we were.

The bus arrived in Beijing at 2 or 3 in the morning and everyone got off. When I prepared this trip I read a few travellers’ stories saying that they were allowed to stay in the bus to finish the night and wait for the subway to open. It wasn’t the case for us, we had to get off the bus, in the dark 2am Beijing. Lucky us we found a 24/7 restaurant that was nearby, and the waiters welcomed us with big smiles. I think I passed out a little next to my noodles, obviously didn’t sleep enough. The sun got up at 4.30am, the city was slightly waking up and people were already out there exercising and doing some Tai Chi.

*conversions rates as of June 2014

There you have it, the guide to the cheapest way to go from Ulaanbaatar to Beijing, or the other way around.

Have you been on the Trans-Mongolian ? How did you do it ? Do you have any tips to add to this post ? Tell us in the comments below !