We started our Tour de France in 80 days by visiting the lovely city of Strasbourg, but our bike tour truly started on a sunny day when we cycled along the Canal from the Rhône to the Rhine.

Cycling alongside a canal is such a great experience, so calm and peaceful. We arrived the next day in Châtenois, ready to learn about one of the most iconic monument in the region : Haut-Koenigsbourg castle. 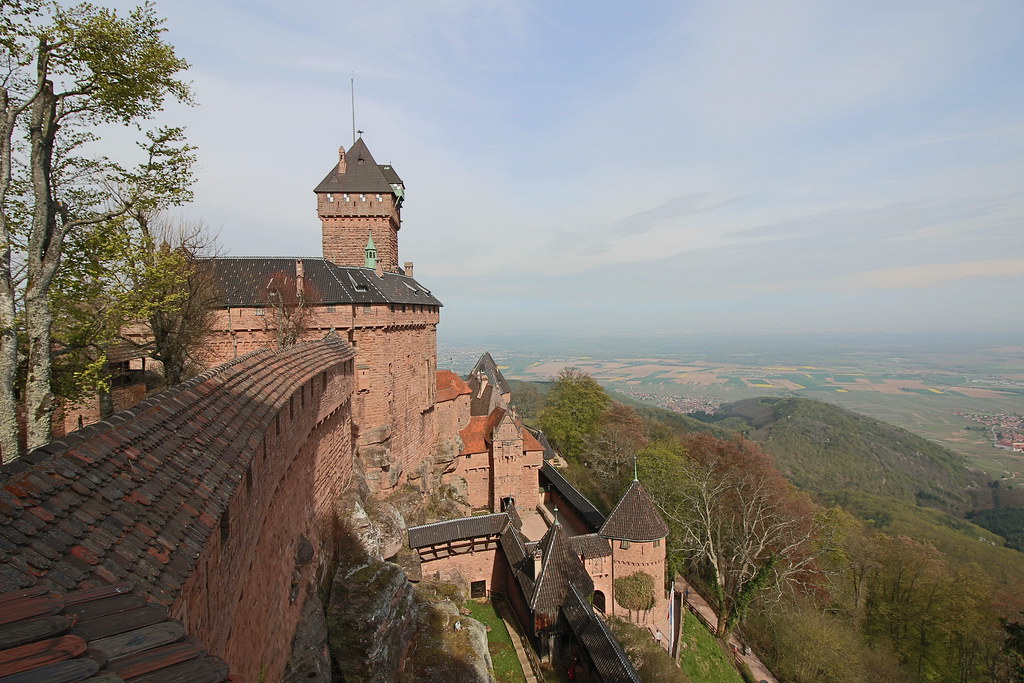 From its 700-meters high mountain, Haut-Koenigsbourg castle overlooks the Alsace plain and the Vosges mountains in a strategic and defensive position.

You can admire the view from the top of the castle, it is actually said that the Alps can be seen on a clear day. The weather was a little foggy when we visited but we still enjoyed the breathtaking view on the Alsatian valley. 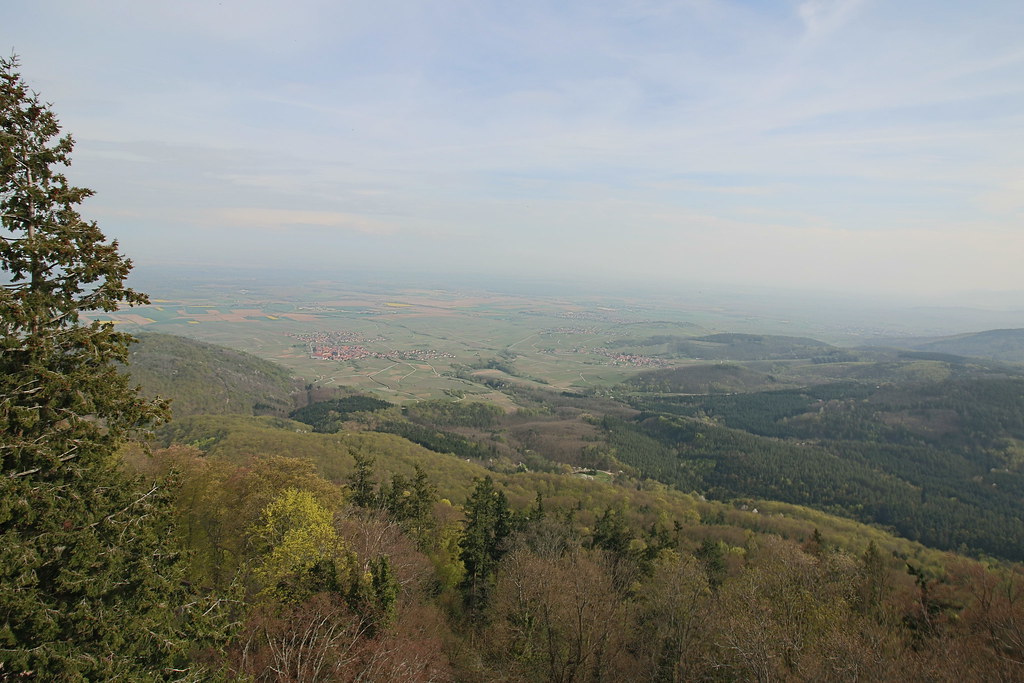 As soon as you go through the castle entrance doors you are transported right into the Middle Ages. As it is a must-do in the region, visiting the castle is usually part of the local schools programs and you will see quite a few groups of students following a tour guide dressed with the Middle Ages traditional clothing. 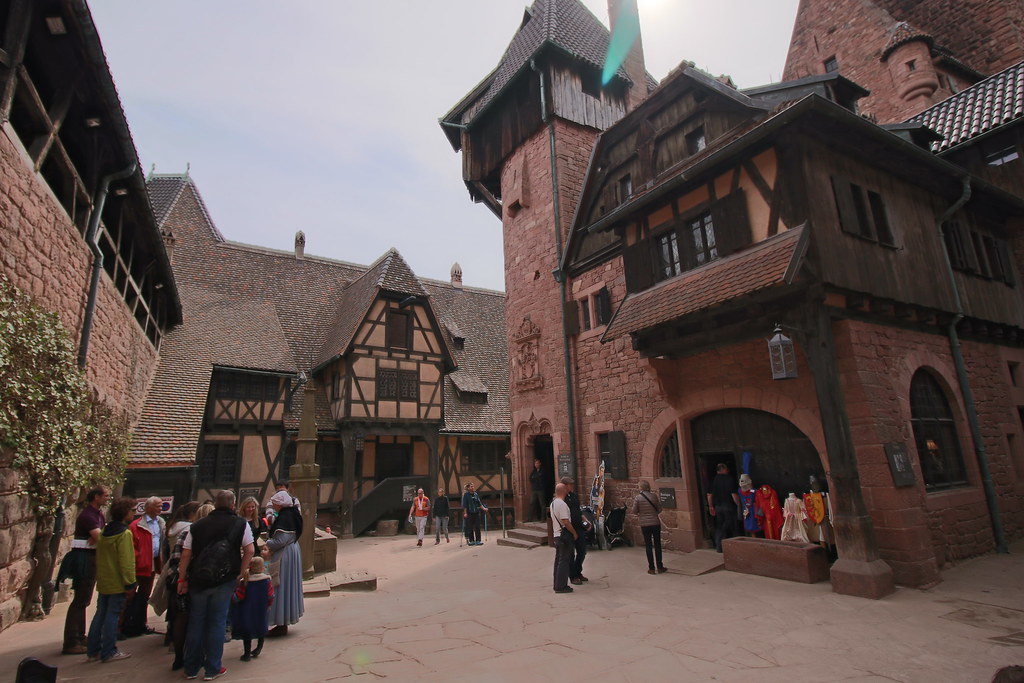 The castle had a turbulent history, built in 1147 it was conquered by the Swedish and burnt entirely, left to ruins for more than 200 years. It was not until the end of the 19th century that the reconstruction work started when Kaiser Wilhem II, German Emperor and new owner decided a complete restoration of the castle. It’s only in 1919 that the castle was owned by France again and listed as a historical building in 1993. 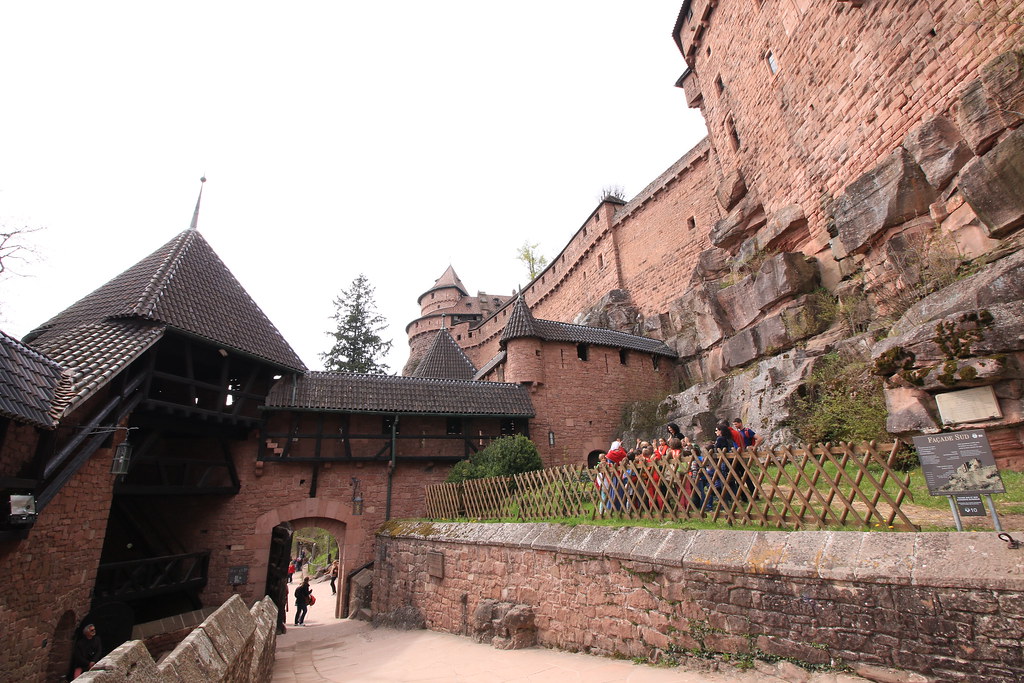 The decoration of the interiors, managed by German architect and archaeologist Bodo Ebhardt, was designed to be a reflection of the Kaiser’s wealth and power. In the dining room, in the picture below, is depicted a great eagle, symbol of the German Empire. 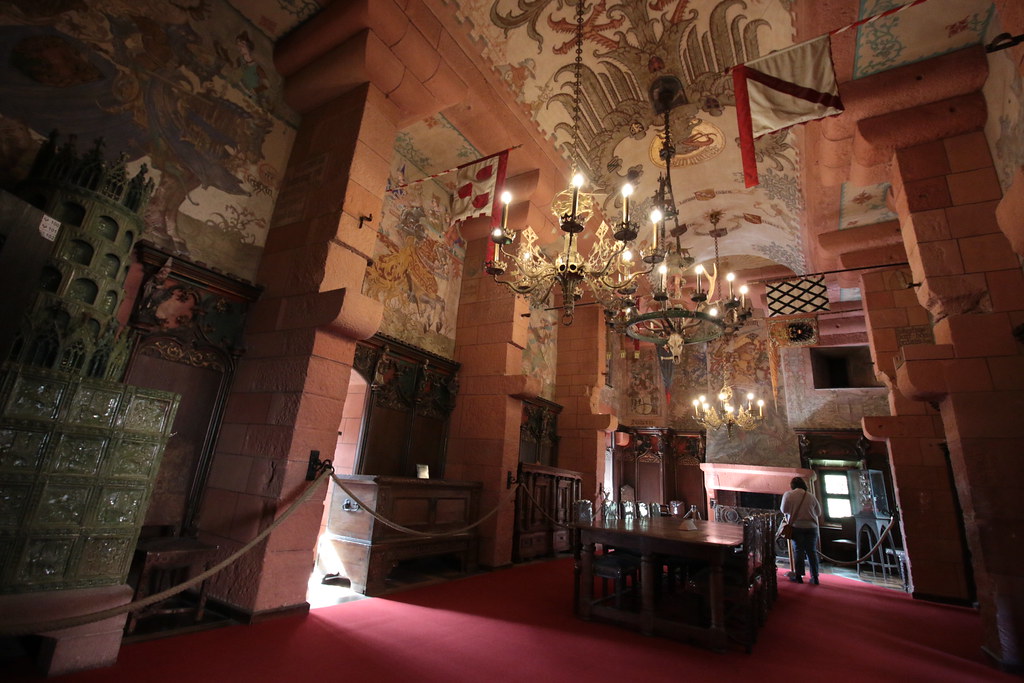 Every piece of furniture placed inside the rooms was meant to inspire abundance and profusion, but was never meant to be used and never was. None of the Emperors has lived there, only some Austrian officers and nobles. The dining room was used only once. The castle redesign was, actually only meant to be what is now, a place to visit, not to live in. 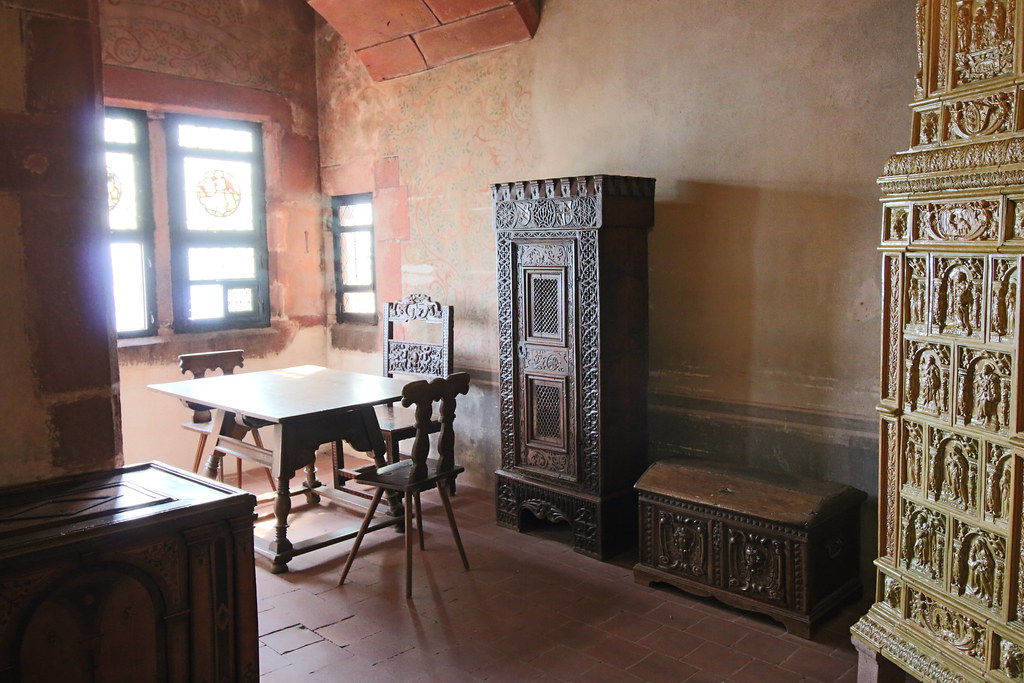 Still, the interiors, decoration and furniture are worth to see, since it depicts a century and a particular style. We’re lucky to be able to visit such a place now, it really depicts what the castle looked like in the 12th century with its impressive walls built with the famous Vosges sandstone. 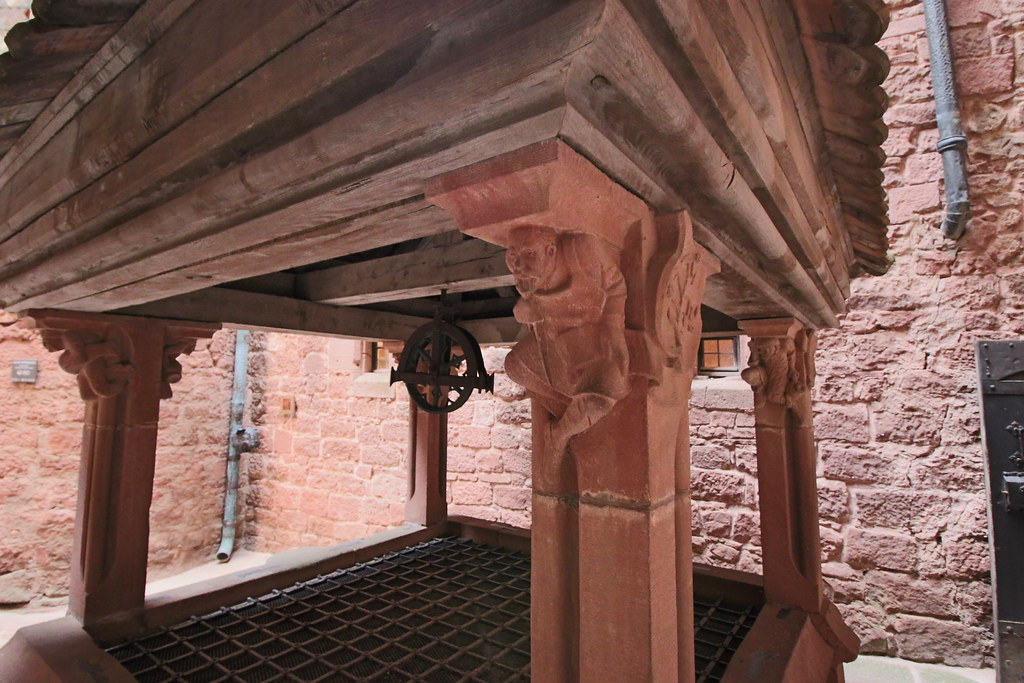 Haut-Koenigsbourg castle is a must-do if you want to learn more about Alsace historical past, plus it’s a great hike if you are into outdoor activities. The view you get from the top is a good enough reason to visit anyway ! 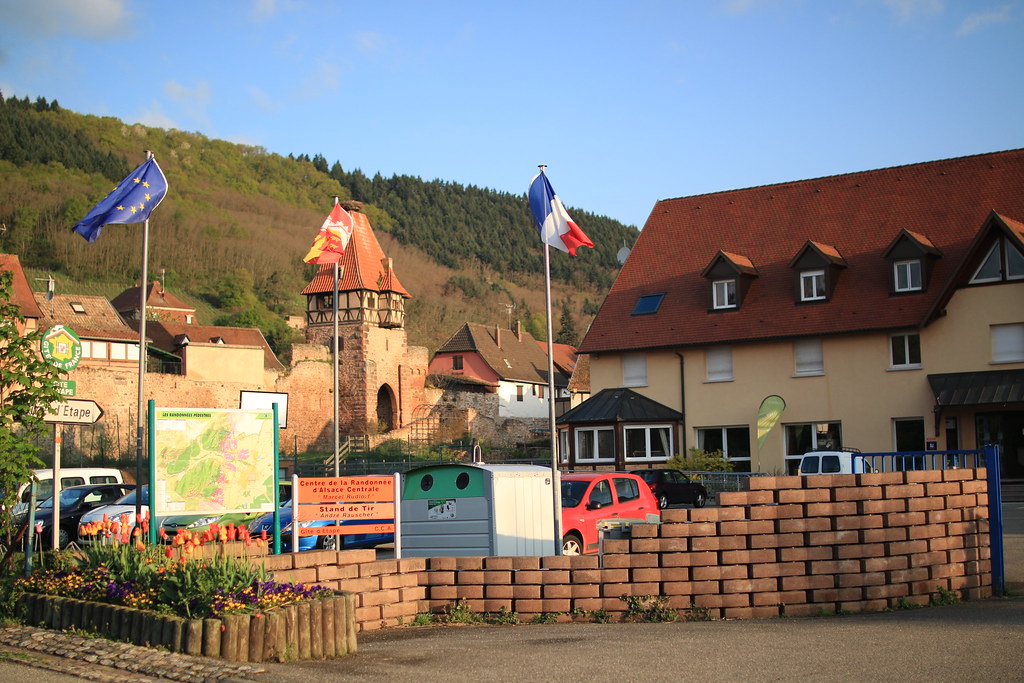 We stayed at the Centre de la Randonnée Marcel Rudloff – CCA in Châtenois. It’s about 9kms away from the castle, accessible by foot or bus. The holiday cottage is a great option for any budget, the staff there is friendly and helpful, it is close to pretty much all the hiking paths around and offers many activities like bike renting. 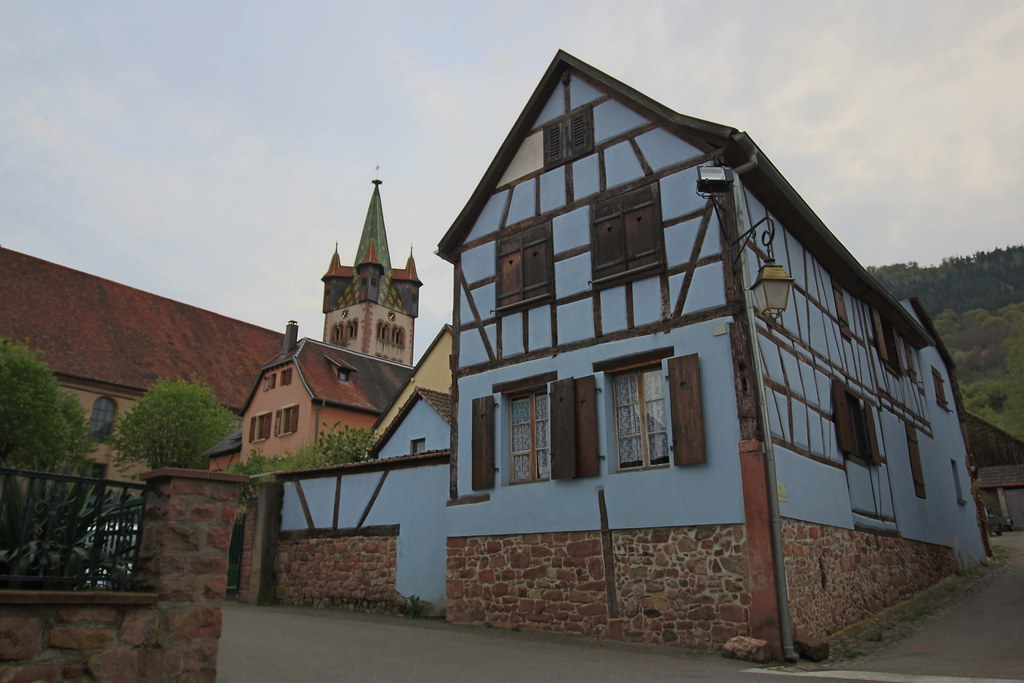 Châtenois is a lovely village, the recently renovated church is beautiful and you can even spot White Storks, a bird symbolic of Alsace, on top of the ancient town bastion.

How to get there

A shuttle bus (2€) serves the castle from the towns of Sélestat and Kintzheim, and also the Monkey Mountain, the Eagles Park and Cigoland. You get a reduced rate at the castle if you show your shuttle ticket.

Hiking paths go up to the castle, it’s about 9kms away from Châtenois and a 2 hours hike starting and ending right outside the Centre de la Randonnée Marcel Rudloff – CCA

Have you been to Haut-Koenigsbourg castle or Alsace before ? What did you think ? Tell us in the comments below !